I promised you earlier to explain how you can get hold of the amazing “International Cover EP”, which Steve Conte recorded at our studio together with his band The Crazy Truth International. Well, here’s how: the EP comes with his solo album, which is currently being mixed in LA by Niko Bolas (known for his work with Neil Young and Keith Richards). He recorded this album together with members from Foo Fighters, Patti Smith, Bruce Springsteen and other famous names.

He does this release all by himself, so without the help of a record company! And in order to finish this record he started a campaign on Pledgemusic.com. And who can better explain how this works than the man himself:

After 18 hours the campaign already reached its goal (unbelievable!). Right now it is even at 113% and counting. If you check out the options on his Pledgemusic page you will see that there are a couple that include the six-song Cover EP (starting from $43). So join and enjoy the songs! 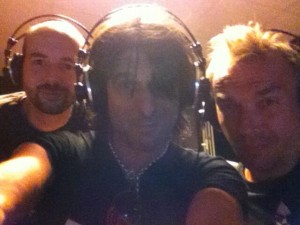 That’s us: me, Steve and Wilco Minderhoud checking the mixes on headphones.

1 thought on “How to get Steve Conte’s International Cover EP!”