A lot has been said about the Loudness War. According to Wikipedia it is a “pejorative term for the apparent competition to master and release recordings with increasing loudness“. Sure, loud music should be loud, but the believe among engineers that “louder sounds better” has resulted in numerous loudness war victims. In order to make the albums as loud as possible, lots of compression and limiting has to be applied to the signal, decreasing the dynamic range of the record and in the worst case introducing digital clipping. The most famous example is Death Magnetic by Metallica. This video on Youtube clearly shows the difference between the CD master (which sounds awful) and the version from the Guitar Hero game, which has a much higher dynamic range. The latter sounds much more powerful and less distorted.

There’s much more to say about this, but for further reading you could go to Ian Shephard’s website (who also initiated Dynamic Range Day), read the wise words of Bob Katz or watch this AES talk by Bob Ludwig.

There are various ways to measure loudness of songs. Currently, EBU R128 is becoming a standard. Another interesting parameter is the DR-value, which expresses the perceived Dynamic Range of a song in dB’s. The Pleasurize Music foundation offers the DR-meter, which measures these values.

In order to see how the dynamic range of albums changed over the years, I analyzed all DR-values in the DR Database. I’ve chosen to focus on the period 1985-2012. The figure above shows the mean DR-value per year. It is clear that, overall, the Dynamic Range of albums has decreased in this period from approximately 13 dB to the 8-9 dB range. It is also interesting to see that the minimum mean value is reached in 2008, the year that Death Magnetic was released. In 2009, we see an increase of +/- 0.5 dB (a double-sided t-test shows that this difference is statistically significant at the 0.01 level). Maybe this has to do with the awareness created by this album with respect to the Loudness War?

Furthermore, it seems that the Dynamic Range does not further decrease over the last four years. Has the Loudness War come to an end?

Finally, the figure below shows the number of albums per year that were analyzed. In total, 14,680 albums were included in the analysis. 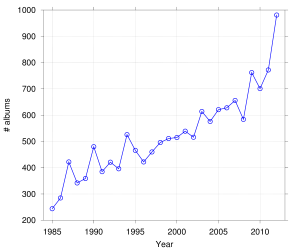 The number of albums analyzed per year.

3 thoughts on “The Loudness War: Dynamic Range over the years”